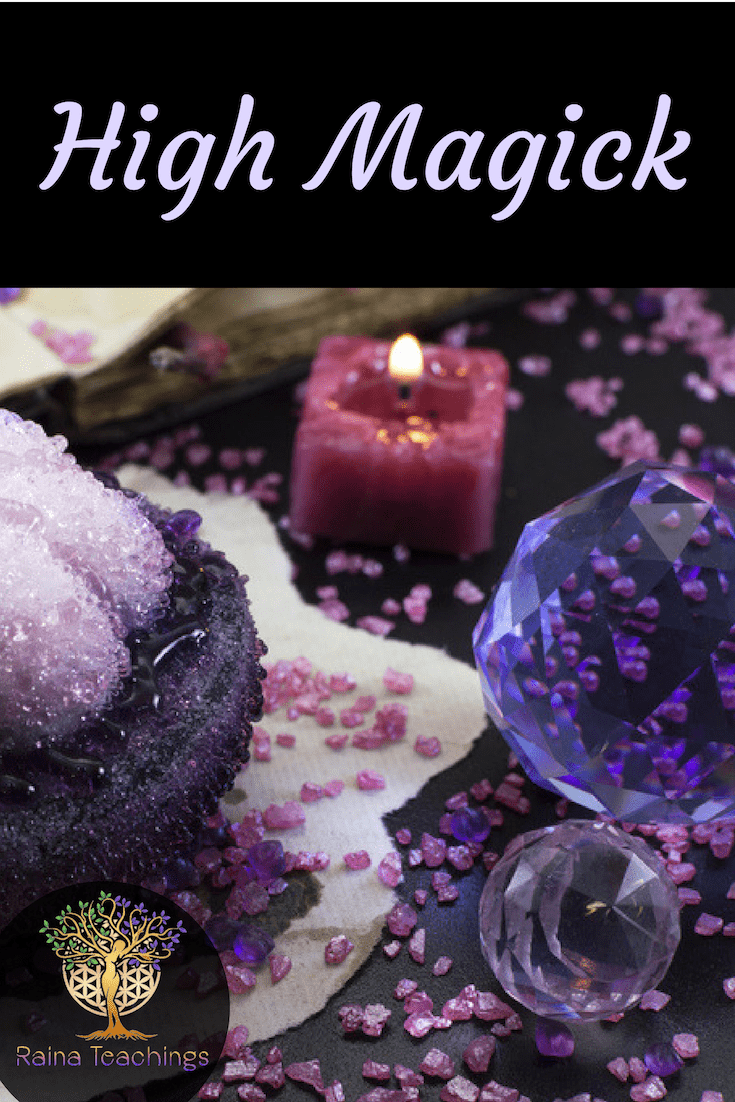 For those in deep knowledge, they may find it surprising that there is a ceremonial magick article and a high magick article. Surely the two are so often used as synonyms for one another, why bother separating them?

High magick is that of the person who seeks a higher goal, a stronger purpose, and needs the oomph to get them there. Often, the craft in high magick is about personal improvement or connecting with a deity (or higher power), higher self etc. This is usually what Raina’s magick is about in our work with others.  Her purpose in channelling magick through me is for the betterment and development of humankind. This is how Raina and I would describe high magick these days.

However, it once meant something else to do with class and status. 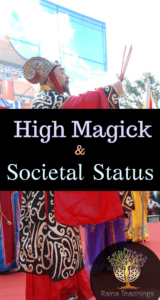 As with all magick, high magick has its roots set long ago when life was much different than it is now. As much as things change, the more things stay the same. High magick lived in the wealth of those who could spend on their supplies without worry. Did a deity require of them an expensive spice sacrifice? It was no matter. The magician or witch wished that connection to happen, found that spice, and shelled out the money for the supply of it in whatever manner they required.

Thus, we have high magick and low magick. High magick was that of those of the higher classes, or ranks, of a society. A pharaoh practiced high magick. A commoner did not. The commoner sent prayers, offered sacrifices, and did small magickal works, often without tools. Though the heart may have been willing, the pocketbook was unable to compete with that of royalty or noble houses.

Who sponsored the larger holiday celebrations, especially during important times of the year? Who decreed when these events took place? And who sponsored the less wealthy to partake of this high magick or ceremonial magick (or sometimes both!) events?

The higher class, in good times, used high magick to show their power, their wealth, their strength, and to shower their blessings on those who deserved them. That bit from the Christian Bible, with Jesus making many fish for the hungry? That’s a perfect example of high magick used without ceremonial term.

Though we live in a time when the classes of first world countries are often elbow to elbow, high magick still sets itself apart from the witch lighting a candle in her window, with its real gold candlesticks and its deeply invested practitioners.

I prefer to think of high magick as a magick that is more about the alchemy of change, transformation and healing. The scientific part of it is of interest and has its place.  For most of us, it lies in our own hearts, minds, experiences and practices.

In today’s world, high magick is often practiced by those with an appreciation for the scientific side behind witchcraft. If ceremonial magick is high magick’s twin, alchemy is their cousin–along with quite the string of other magickal practices. Those who desire to explore magickal geometry are also drawn to high magick and the work of sigils, runes, or any variety of ground symbolism which may be drawn, carved, or otherwise inscribed to create a sacred space for any number of high magick needs.

Awakening to Your Dark Shadow

Your shadow has both a dark side and a light side. We want to explore…

10 Steps To Connecting With Your Unborn Child

Why is it important to create a relationship to your child before birth? This is…

We wanted to answer this question from the perspective of an Inner Spirit Teacher.  …