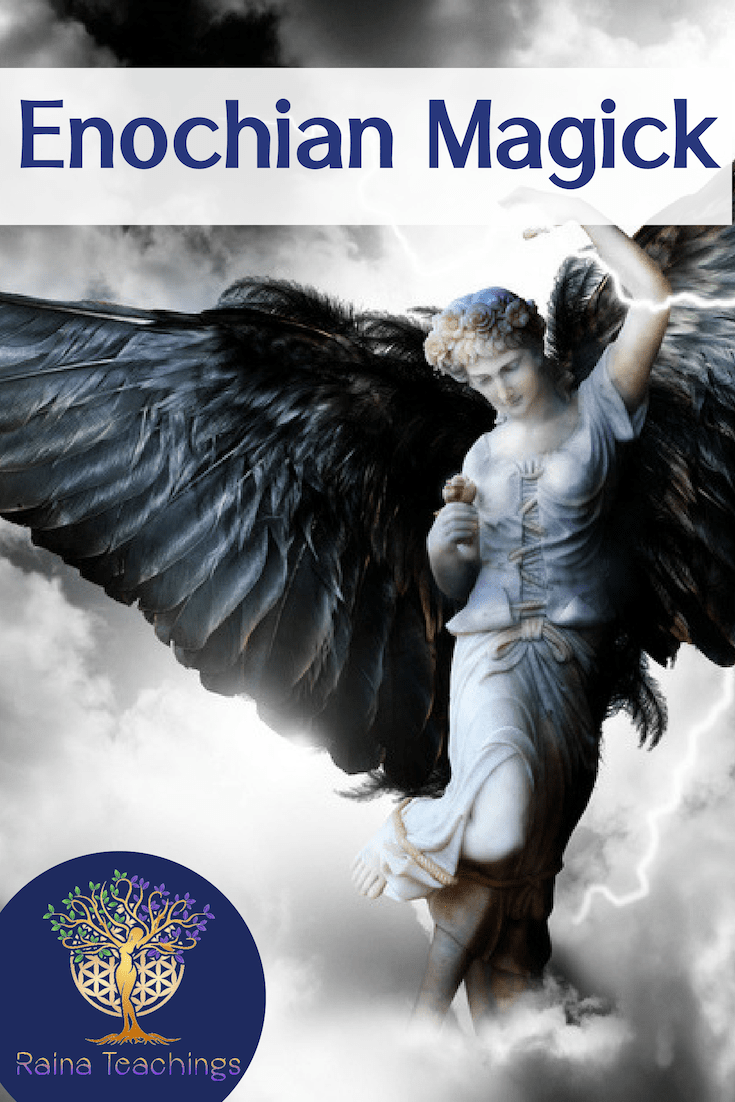 Enochian magick is related to the beliefs and systemic works of a 16th-century physician and his assistant, John Dee and Edward Kelley. The two said that, during their lifetime, they were contacted a multitude of times by an angel. Though there is some debate in the texts if they were contacted by a singular angel, many angels, or something else entirely.

Though this information has been translated, added to, taken from, and otherwise edited a myriad of times over the past nearly 500 years, as of this writing, many Enochian magicians try to use as much from the original text as possible.

This text was preserved in several formats, across many years, in the British Museum. Along with the original formatting of the Enochian/Angelic language, many graphic outlines to performing rituals, and other such magickal information, have come the additions to this manuscript. Some of those who have added to Enochian magick are Elias Ashmole, Israel Regardie, and, of course, Aleister Crowley.

There is some evidence that Aleister Crowley took parts of Enochian magick with him into the Golden Dawn and throughout that section of magickal understanding. Indeed, there is a great deal of belief that Crowley’s inspiration may have been balanced with scripts such as Agrippa. This is also thought to have inspired the originators of the Enochian magick writings.

Enochian magick practitioners today have stepped it up a notch, often pulling any number of other ceremonial-style magicks into their practice and mixing them as they see fit. Though this eclectic combination is common within witchcraft circles, it is especially hard to say when this became “acceptable” within a framework as tightly woven as Enochian magick is. Within the writings of Enochian magick, the acts are pretty exclusionary. Though this does not mean that the magician is forbidden from using other inputs within their witchcraft, it seems to be found as unnecessary in many circumstances. 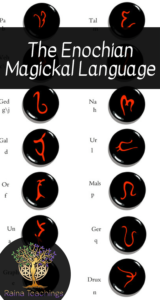 Enochian is known an occult or angelic language recorded in the private journals of John Dee and his colleague Edward Kelley in late 16th-century England. Kelley was a spirit medium who worked with Dee in his magickal investigations. As in the picture we’ve included here they were symbols that even had a specific sound very similar to the english language. It is said there are 48 gates (a 49th not meant to be open) that are spoken for different magickal purposes.

The angelic language and sigils of Enochian magick can be found in its complete format in several writings of witchcraft of the era. This was a time when witch hunts were considered to be a legitimate issue for those practicing magick. The 16th and 17th century was the peak of the mania in Europe, and yet, Enochian magick managed to make its debut in that time.

The angelic language and sigils of Enochian magick can be found in its complete format in several writings of witchcraft of the era. This was a time when witch hunts were considered to be a legitimate issue for those practicing magick. The 16th and 17th century was the peak of the mania in Europe, and yet, Enochian magick managed to make its debut in that time.

These men were scientists and very well respected during their time. The language was lost for quite sometime until a man named Enoch revived it. It came to be known as the Enochian language after this.

In my time as a trance channel, I have come across other channels that claim to speak this language or a variant of it. I’m asked if Raina has her own language. The answer for me is no. My channelling has never resembled anything similar to this Enochian language. Raina uses english but speaks in a germanic druid accent similar to what she probably sounded like when she was physical.

I do find this very fascinating.  What I’ll say is that each Inner Spirit Teacher or Angel, communicates in their own way and works their own magick. It is a perspective that is brought through always for the growth of human kind.

I believe the Enochian Angels were probably a specific consciousness that needed to come through during that time to help work magick for the planet. They chose these scientists due to the type of magick they were working. Hence this Enochian language is known for both it’s science and it’s mystery.  I have yet to work with these specific symbols only because Raina has not guided me to. I will update in a future post should it ever come to my attention that this would be of benefit.

Our modern-day Enochian Magick looks very different. The craze of angels brought by Doreen Virtue helped to revive such practices even without knowing this was the case. Channelling in itself is Enochian Magick.  With some Enochian knowledge, the two methods go together beautifully. Magick itself is a trance type of practice. Add angelic beings, and there you have Enochian Magick in our modern era.

This is to say you are in fact working magick along with your channelling. Raina was clear about her intention to work magick with me and others right from the beginning of our relationship. She has had to wait for me to catch up to the idea of magick as a regular part of our practice. In this sense we are absolutely working with this type of magick.

I became a channel long before I knew what Enochian magick was. I found it reassuring to see that some things do not change, too much, as those who are meant to awaken to these beings and their magick will do so.  Of course, knowledge being handed down in our generations is very needed to ease the process of awakening so that it is not so shocking when we are contacted by these angelic beings.

Faeries & Elementals have been with us since the beginning of time. Much like you…

To be individual is to be divided and unified. You are all afraid of what…

How To Do A House Blessing

I’ve been hired to do house clearings over my 15 year career many times. I…