Channeling and Raina came into my life and also brought paganism, the druids, witchcraft, Wicca and many other magickal traditions to ponder.

As a child I knew Halloween was my favorite holiday. It wasn’t the candy or the trick or treating. It was a feeling I began to feel right at the start of October. I was raised in an atheist home that also went to a Christian Church. This dichotomy taught me to think for myself and not just choose a belief system because I was told to do so.

As I got older, these more “witchy” traditions made sense to me and I began to remember them. It’s not a surprise that I created a career surrounded in spirit, or that spirit surrounded me with a career. That is more like it. My work found me.

I resisted studying any type of paganism for a long time. Then, my channeling began, along with my relationship to a Druid being. This has led to many wonderful things in re-opening my remembrance to these old ways.

It didn’t occur to me for several years that this may actually be part of my heritage. In fact, it is, and I began to seek out the definitions of some of these words. I hope you enjoy my research and can blend it with some of Raina’s channeling. I know for myself it’s been helpful in understanding and allowing these ancient ways.

What is a Neo-Pagan?

Neo-Pagans tend just to shorten the term to “Pagan” these days. You’ve probably run into dozens, maybe even hundreds, without ever knowing that they believe what they do. Why? Paganism thrives on being an ask, not tell sort of religion. That’s right. Most Pagans in general never bother to try to spread their religion. The vast majority of them believe that those who are meant to be Pagan will come to it in their own time.

A Neo-Pagan is someone who fits under a very large umbrella of various pagan religions, beliefs, folklore, and witchcraft. It is more a blend of these systems into a modern era. However, these newer Pagans typically believe in younger systems. Meaning, a Neo-pagan has created their system based on these older, magickal systems but do not closely follow them according to the history that is available.

They tend to be solitary, do not follow other pagan groups and study many different systems, adding them into their own culture. They pull from tradition but do not follow a specific one. They are a naturally based, gender neutral, and a very open type of metaphysician.

They believe that spirit comes from within and do not take easily to authority. They believe they are all “part” of the whole. Sound familiar? This is not too different than what a metaphysical person believes. The difference is that a Neo-pagan is still utilizing the old magickal traditions and follows the wheel of the year, but observes it in their “own” way. I like to think about them as a non-authoritarian type of pagan that works to adjust their practices to that of our modern people and needs.

Isn’t This All Witchcraft & Devil Worship?

Not even a little bit. The vast majority of Pagans completely disagree with the Abrahamic religions of Christianity, Judaism, and Islam concerning good vs evil. Indeed, most believe there is no such thing as ultimate good or ultimate evil. The whole “many shades of gray” terminology pop up a lot with Pagan beliefs.

This leads us to talk of demons and devils. After all, many of the Abrahamic branches of religion believe that if you aren’t devoted to their specific deity, you are worshipping something made of evil intent. The many deities of Pagan religions go more in-depth than simple good or evil. The intent is so critical in both Pagan practice and Pagan process. 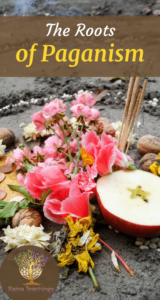 The term pagan stands for a nature-based polytheist (meaning many gods and goddesses), non-dogmatic type of spiritual practice that pulls from ancient ways yet embraces many different ways. Under this term are many different types of pagans, one being the Neo-pagan we discussed earlier.

Ask a dozen Pagans what they believe, and you will get a dozen different answers. Some of those answers may even be “I’m not sure yet”, and that is entirely acceptable in most Pagan circles.

For the Pagans we’re talking about in this article, a vast majority of them have or had some interest in Wicca at some point in their religious journey. Why? It is merely one of the most accessible Pagan religions, with books easily found in libraries and local bookstores in nearly all reaches of first world countries. With Wicca’s tenants rooted in a large majority of older religions, most pre-dating the rise of Christianity by several thousands of years, it’s an excellent way to introduce the curious young Pagan or the interested third-party to the wide world of Neo-Paganism as it stands today.

Within the world of Wicca, there is a vast expanse of beliefs and tenements. Indeed, there are as many types of wiccans as there are Neo-pagans.

The reconstructionist Pagan uses every tool they can to participate in historically-accurate religious events. Unfortunately, so many of these various texts were lost due to wars, fires, and age. Books and scrolls were not as plentiful in ancient times due to their cost. So, many traditions were passed between participants vocally, improved upon or changed due to necessity or politics, and those sadly died with the participants.

Now, reconstructionists of various old religions try their best to hunt down fragments of a society long past.

A good example is Druidism. Unfortunately, most of the Druidic knowledge was either verbal or destroyed in tragic takeovers, which makes it incredibly hard to reproduce certain rituals without historical knowledge. Many do a great job in reconstructing ritual. There is one I have been a part of a short time in my research. What I find most commendable is the outside ritual we often hear about taking place.

Egyptian Paganism is what you think of when someone says Isis & Osiris. The Egyptian reconstructionist Pagans have a lot at their disposal. The most significant question is the validity of some of the interpretations. It seems that we are often re-interpreting Egyptian transcripts and finding hidden meanings. We may have a piece of hieroglyphics that state a recipe or a prayer, only to later find that the same piece of hieroglyphic script is tongue-in-cheek or meant to be a personal memory from that specific era.

Add into it that the Egyptian religion was a growing, changing thing throughout several thousand years and you have much land to cover if you’re an Egyptian-leaning Pagan. Thankfully, most beginner text is readily available.

German pagans are often called Heathens or Heathenry. Their reconstructionist movement and beliefs are similar to the other European people. Heathenry only refers to a polytheist view of multiple gods and goddesses. Same idea as the others, but German pagans have their own set of gods/goddesses. Again, similar to a different sect of a religion.

This happens to be where my druid roots come from. I have a student that happens to be Irish and a speech therapist. I have not known what Raina’s accent is when I channel her. This student said that she hears an old German accent in there most which happens to be the majority of my decent. Not something I was raised with as my ancestors came to America many generations ago. I find it fascinating that Raina chose something that is so close to my ancestry without me even knowing it.

Hellenic have the same luck that most Egyptian reconstructionists have. Of all of these religions, it is the Hellenic that vies for the most informed position with the Egyptians. In truth, neither of these religions ever completely fell. Yes, shrines and temples were destroyed and holidays may have changed, but many cultural signifiers and other such things are so heavily rooted in who these people were that we still see it reflected today.

There are other, smaller reconstructionist groups. For instance, there is a polytheistic group on Okinawa in Japan dedicated to remembering their Pagan roots. There are a significant number of Native Americans intent on sustaining older belief systems which are, though those groups may or may not describe them accurately as Pagan.  This is what you hear of as “Shamanism.” Last but surely not least, there are Aztec and Mayan reconstructionists trying to reclaim their heritage through lost religion.

Paganism and Neo-paganism covers a large area of what “used to be” of ancient magickal religions. We can do our best to uncover what we can, but it remains a very open, non-dogmatic and metaphysical religion. It seems that these ways are all adopted from a shamanic/pagan view of which all religions (dogmatic or not) were built on.

Metaphysicians seem to know this and enjoy what has come of it in our modern practice. I like to think of myself as a metaphysician rather than a pagan. I have never really called myself anything other than this, and ultimately I don’t think it matters. Your natural spirituality has roots, and those you pull up are meant to be your seeds of creation.

I hope this was somewhat helpful to those of you who are interested in the many forms of paganism.

Discovering your metaphysical nature and going through an awakening can be exhilarating, alarming, joyful, ecstatic,…

To be individual is to be divided and unified. You are all afraid of what…

We wish to write of the growth of the soul over lifetimes. Your soul holds within…