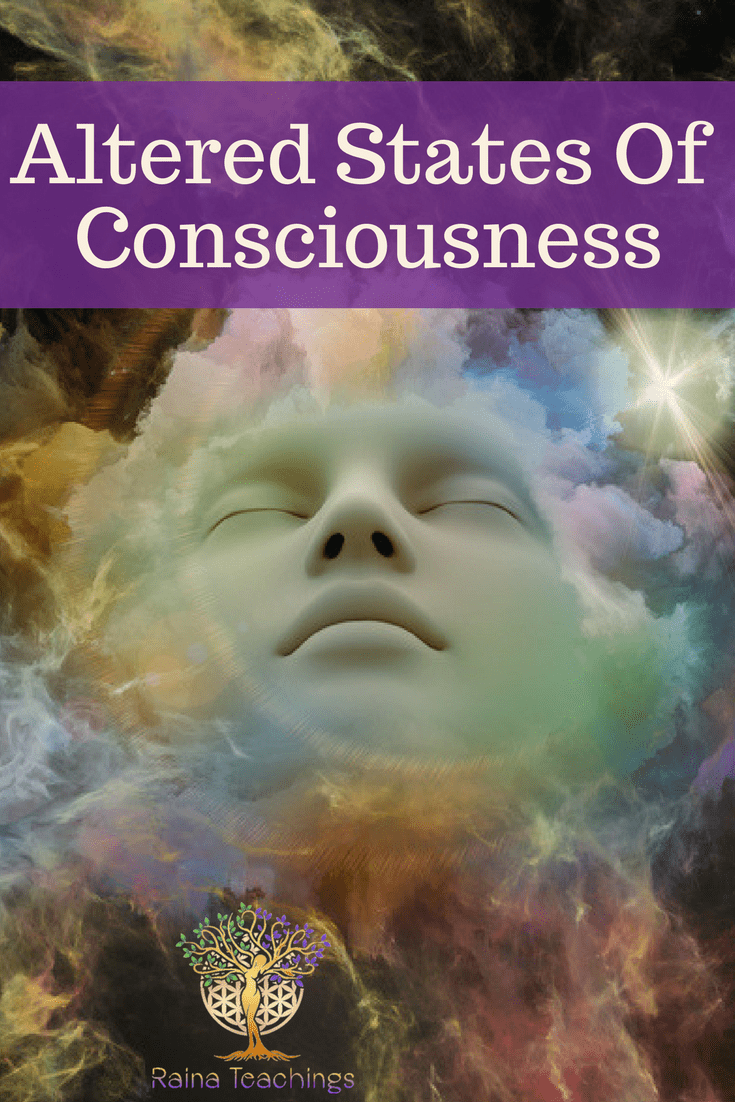 There are different levels of altered states. I’m in an altered state often due to my channeling and healing work so I wanted to talk about it from my own perspective as a trance channel.

When I began awakening I would find myself in very slight altered states randomly and did not think I had control over it. There isn’t another way for spirit to get to you unless you enter a light, other worldly state of some kind. I call this spirit “knocking” on the door. It’s what made me pay attention to another reality.  As I worked with it consciously, I no longer felt as if it was just happening to me.

At first, I would notice it if I talked to another person about spirituality. The atmosphere in the room would change and my body would get chills when the person said certain things that resonated as truth. This is probably the very beginning state of realizing you are in an altered state.  I thought maybe it was just me seeing things, but before long the other person would comment on it. Pay attention to how the atmosphere and air changes when you are discussing spirit. It’s quite magickal.

The next phase of an altered state happens during meditation or near sleep. These states are similar in that you are fully aware that you are in an “in between” place. We usually have to work at it with meditation to begin with. Watching TV or driving will also put you in a meditative state. I don’t suggest using television for this. It is the lazy mans meditation and makes you susceptible to the suggestions of the television and is not a very productive meditation.  The reason is, you are not doing the work, you are relying on an outside source that is not designed to assist with meditation. It just so happens it makes you check out.

Daydreaming is also in this category. I was quite a daydreamer as a child. This state is natural and very necessary to our ability to problem solve and create. The more we are pulled out of it, the more we are working from a conscious state that is very limited.  We need the dreamy meditative state to work with spirit and to have solutions just pop into our minds. This is why working with meditation is so beneficial.

Another altered state that is not give enough credit here is sleep. It is something we all do so that we can return to the spirit world every night to re-charge, work on other things and even help others. We don’t remember most of it because we become unconscious. This is necessary to revive us and fill our bodies with enough spirit to keep living. Have you ever had a hard time sleeping? If so, it affected your life hugely.

I believe the reason we sleep is because this altered state is necessary to process the physical world and return us to our natural state. It shocks me that this alone is not proof enough for people that  the spirit world is real. If this was our true place, there would be no need to become unconscious to it every single night.

When I am in a Clairvoyant or Medium-ship state, I am deeper than I would be if I was not doing these things. It does not appear to the person I’m working with, that I am in a trance at all.  I am in fact in an altered state of consciousness that allows me to retrieve information I would not otherwise know. It is a lighter trance state sometimes called “open channeling.”

Then there is the Semi-conscious trance vocal channeling state. I am also not unconscious but in a state deep enough to allow Raina to come in and change my voice to talk to people directly. Believe it or not, this is something I had to really earn and work for. She made herself known a few times to me and then I had to want it enough to seek out a teacher. Meditation was the first tool I used that brought me to this space. The longer I am in trance, the less I remember, but I do have the gist of what she is saying to a client or class.

There are very few channels in the world who channel this way but they do exist. It isn’t something they choose themselves. When your Inner Spirit Teacher comes into work with you, they will decide whether it’s best to channel with you semi-consciously or unconsciously. It is the same as a REM sleep state where the person falls asleep, talks and then wakes up not knowing they were talking.  Many think this is the best way to channel and I would say it is only one ONE way to channel, and not one that someone has any control over. Meaning, our egos do not get to choose it. It is also not better or less than. Just an unconscious versus semi-conscious state.

I will talk about this in future, more in-depth posts. For now, I will say that I can’t leave this out when discussing altered states. It is an induced state that is created by ingesting or smoking something with DMT, cannabinoids or another chemical that changes your state of consciousness.

I do not agree with synthetic drugs. However,  I do feel that plant medicine when done with responsibility, under a trained shaman’s care can be life-changing and beautiful. What’s the difference? Space is being held by a trained professional for the spirit that works through the plant as well as for the person wanting to heal.  The intention is healing. Not for a fun, irresponsible kick.

Drugs are plants that have been altered by humans to become synthetic and have a low vibrational spirit that matches its change. The result is a spirit inhabiting your body that does not have the best intentions in mind.

A plant medicine is still in its natural state as it was intended to be taken and will have the guardian spirit that oversees it intact. This plant spirit teacher will work to heal your mind, body, and spirit very similarly to how a channeled spirit being would.  Taking this medicine is a shortcut that allows you this experience without spending many years meditating. Now, doing the work yourself is most important, but an experience like this can show you what is possible.

We all enter altered states of consciousness every day. Working with one to improve your mood, life, or to heal yourself, has behind it the intention that will carry the altered state. It doesn’t have to be scary or weird. If you are wanting to consciously work with an altered state, start with a simple guided meditation. The more you work with this yourself, the longer lasting and permanent results you will have. I would not be a trance channel today if I had never begun to work with simple meditation and altered states.

Good luck on your journey.

I’m the first to admit that meditating was hard work when I first started. I…

Your inner child desires your love, attention and acknowledgment. Many of you do not yet…